On 11 November 2019, we celebrated the 101st anniversary of Poland’s regaining independence. It is not an overstatement to claim that the whole world celebrated that occasion with us. As part of the “Independent Poland Sings the Anthem” campaign, at noon on 11 November, the Mazurek Dąbrowskiego (“Dąbrowski’s Mazurka”) was sung on every continent! More than 300,000 people enjoyed the Independent Poland Festival in Krakowskie Przedmieście, and almost 200,000 watched the “Concert for Independent Poland – Meaningful Words” TV broadcast.

In 2019, we also celebrated the anniversary of the Silesian uprisings, which allowed the newly reborn Second Polish Republic to extend its borders. In addition to concerts, exhibitions and publications, a nationwide information campaign entitled “Thank you Silesians” was rolled out as well, which highlighted the fates of the region’s inhabitants, including women who made efforts to support their families in the absence of the men who fought in the uprisings. Uprising participants mainly included ordinary people whose commitment and determination brought significant political changes.

Those two events were inextricably linked. On 4 June 1989, Poles sent a signal to the world that changes were afoot and that freedom and independence from Soviet influence that our part of Europe yearned for so badly were imminent. The first partially free elections demonstrated that the Polish society staunchly opposed the Communist rule and wanted to free itself from its yoke. Courage and the will for change triumphed, unifying the nation and ensuring a turnout at the ballot box that has not been bettered to date. 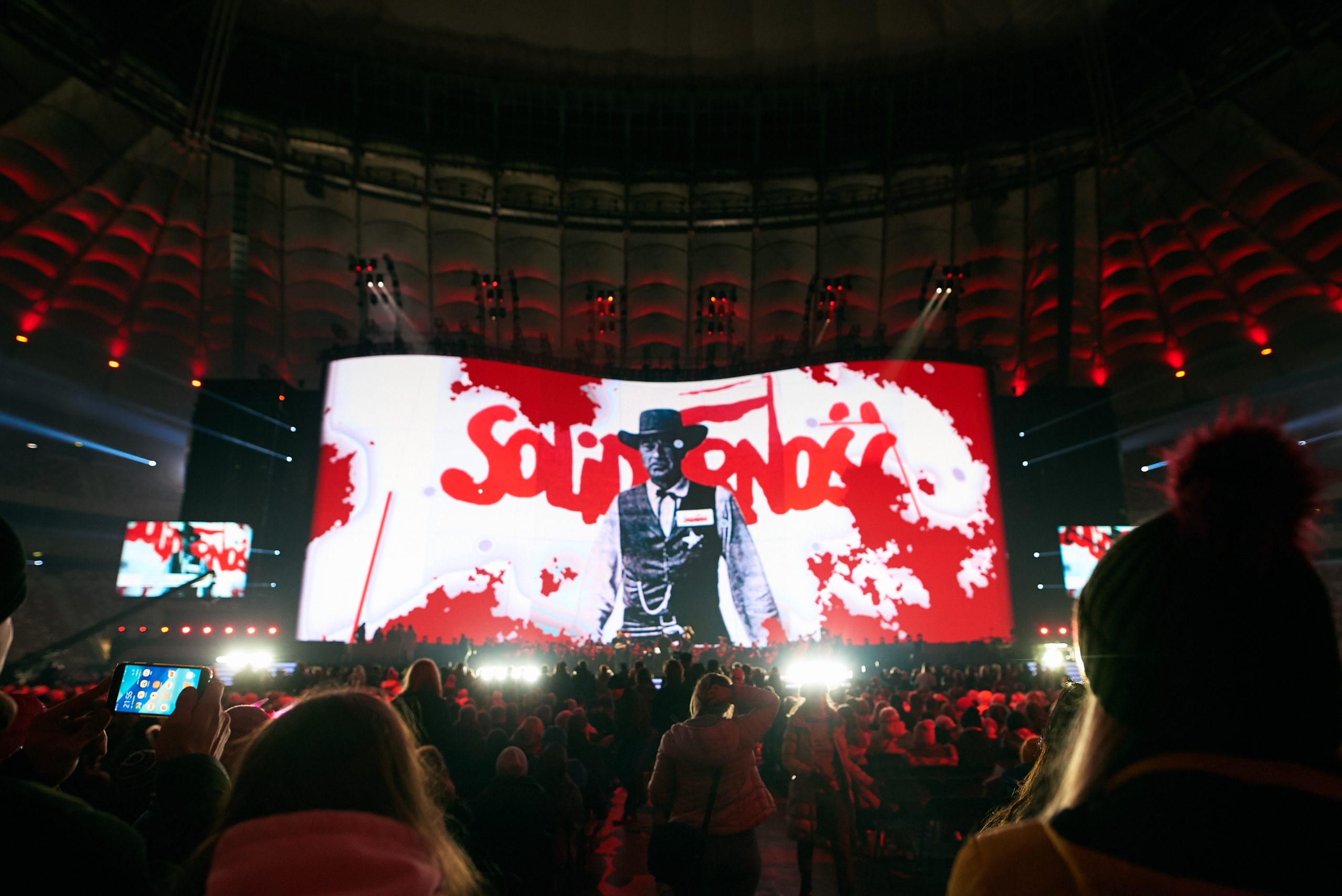 Concert at the National Stadium, photo: Dominik Deras / Office of the “Niepodległa” Programme

That would perhaps not have taken place had it not been for John Paul II’s earlier pilgrimage to Poland. The words spoken by the Polish Pope in 1979 resonated with the listeners, giving them hope that Poland could once again rise up, and free itself from Communism. John Paul II played a significant role in the peaceful liberation of Poland from Soviet influence. His first pilgrimage to his homeland after being elected pope proved to be a landmark event, a spark that lit the flame of freedom.

On the fortieth anniversary of that visit, a special concert dedicated to John Paul II and his first pilgrimage to Poland was organised at the Piłsudski Square in Warsaw – one of the places where the Pope had spoken in June 1979. It was broadcast on TV and radio.

The concert consisted of eleven parts, each of them based on a message from the Pope from one of the nine places he had visited during his pilgrimage. The show began with church bells ringing from towers near the Piłsudski Square. Each part of the concert featured the most famous songs dedicated to John Paul II and also songs that were sung by Poles and by the Pope himself during his first pilgrimage.

The Polish Pope visited just a few cities in nine days, but he touched the hearts of millions and allowed Poles to believe that freedom was within reach. On the fortieth anniversary of that unique pilgrimage, a series of chamber piano concerts were held in the places once visited by Karol Wojtyła. During those concerts, pieces were played that were dedicated to specific events and composed in honour of John Paul II, as well as those that the Pope used to like.

The Office of the “Niepodległa” Programme, together with its partners, which included PKN Orlen, the Polish Press Agency and the Polish State Railways, and in cooperation with local governments, symbolically recreated the route of the Holy Father’s first pilgrimage to Poland through a series of exhibitions organised at seven transport hubs in the cities visited by Pope John Paul II at that time. The exhibitions, entitled “The Great Pilgrimage – a Polish Family Album”, consisted of photographs from Polish Press Agency archives and were displayed in public spaces in Warsaw, Kraków, Częstochowa, Gniezno, Nowy Targ, Oświęcim, and Wadowice. 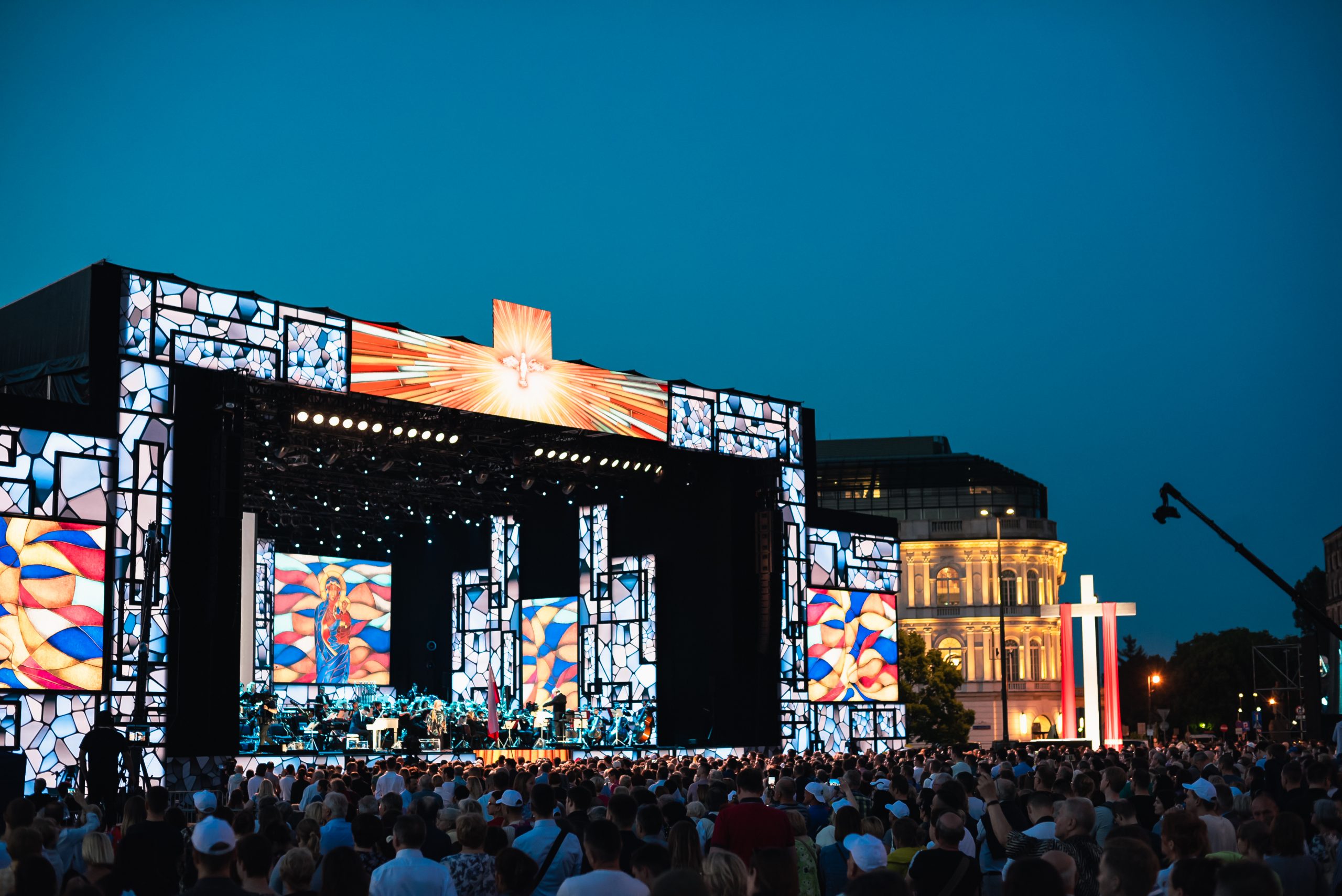 In order to commemorate the elections of 4 June 1989 and the most important social movement in Poland’s recent history, the Office of the “Niepodległa” Programme organised a special concert entitled “Songs about Free Poland – Gintrowski and Kaczmarski at the University of Warsaw”. In the courtyard of the University of Warsaw, artists performed songs by “Solidarity” bards Przemysław Gintrowski and Jacek Kaczmarski, which have become permanently ingrained in Polish national consciousness.

In addition, on the 30thanniversary of the June 1989 elections, a concert was held at the Grand Theatre, featuring outstanding pieces by Polish musicians. The Grand Theatre resonated with parts of Halka, an opera by Stanisław Moniuszko, along with a fantasia by Frédéric Chopin, a suite by Witold Lutosławski, and dances by Henryk Górecki. The invited guests included the presentatives of the Polish Government and Parliament, the President of the Republic of Poland, all former presidents and prime ministers, as well as members of the diplomatic corps.

On 11 November at noon, the Mazurek Dąbrowskiego (“Dąbrowski’s Mazurka”) was sung in almost 800 locations of particular significance for Polish history and identity, including at the Wawel Castle and from the tower of St. Mary’s Basilica in Kraków. In the Kraków Market Square, spectators sang along with the Polish Radio Choir. The choir of the Warsaw Police Headquarters performed the Polish anthem in front of the Mostowski Palace, while in the Castle Square in Warsaw it was sung by residents of the capital and tourists with the support of the Mazowsze Song and Dance Ensemble. The Mazurka could be heard both during the official state ceremony in the Piłsudski Square in Warsaw and in small towns – at community centres, schools, kindergartens, parks, and squares. For the second time, the “Independent Poland Sings the Anthem” campaign involved a group of winter swimmers.

1. “Mazowsze” ensemble in front of the Royal Castle, photo: Tomasz Tołłoczko / Office of the “Niepodległa” Programme

The anthem could be heard from the Baltic Sea to the Tatras: it was performed in the Mielno and Międzyzdroje seaside resorts as well as on Szrenica – one of the peaks in the Karkonosze Mountains. Dąbrowski’s Mazurka was also sung abroad: in Antarctica, Australia and Africa, in Asia, including Beijing and Bangkok, and in the Americas, for instance on the Copacabana Beach in Rio de Janeiro, Brazil.  Researchers from the Henryk Arctowski Polish Antarctic Station and soldiers from the Polish Military Contingent in the Bagram airbase in Afghanistan joined in.

Volleyball players and fans across Poland took part in the “Independent Poland Sings the Anthem” campaign as well. During the weekend from 8 to 11 November, all professional league volleyball matches (as part of PlusLiga, Women’s Volleyball League, and KRISPOL 1. Men’s League) were played in a unique red-and-white setting, which included card stunts, special animations, and joint singing of the national anthem before each match. Handball players also took part, and the Polish speedway team recorded a special spot promoting the “Independent Poland Sings the Anthem” campaign.

In 2019, more than 300,000 people participated in the Festival. The main events took place on three stages – for musical performances, for dances, and for children. Additionally, a parade of historical horse-drawn carriages and automobiles from the 1920s–1950s passed through Krakowskie Przedmieście. A period re-enactment was also staged, featuring ladies in elegant early 20thcentury costumes and policemen in historical uniforms.

1,600 people in the building of the National Polish Radio Symphony Orchestra and 84,000 in front of their TVs watched the “Concert for Independent Poland” live. The performance took place on 10 November 2019 to commemorate the 101stanniversary of Poland’s independence and also the centenary of the Silesian uprisings, which had a significant impact on the shape of the independent Polish state. On 10–11 November, the Polish Television re-broadcast the concerts organised by the Office of the “Niepodległa” Programme in previous years – the “We Will Return in Glory” concert prepared to celebrate the 99thanniversary of Poland’s independence, as well as the great “Concert for Independent Poland”, which took place in 2018 at the PGE National Stadium.

Funding was granted to various educational and animation projects that involved interaction and cooperation – workshops, scouting games, quests, thematic walks and hikes, competitions, location-based games, planning and marking thematic and historical trails, clean-up and documenting work at cemeteries and sites of historical importance, activities aimed at identifying and documenting local cultural heritage (both tangible and intangible), and social archives. Funding from the “Niepodległa” Multi-Annual Programme made it possible to organise lessons and meetings, lectures and discussion panels; murals were painted, and interdisciplinary projects were implemented that supported local communities in identifying and disseminating knowledge about local history and cultural heritage.

Throughout the weekend from 8 to 11 November 2019, the “Independent Poland. A Meeting Place” cultural space, arranged at the Royal Łazienki Museum in Warsaw, hosted numerous events to celebrate yet another anniversary of Poland’s independence. Nearly 800 people took part in family workshops, concerts, dances, and joint singing of patriotic songs.

1. “Playing Games with Independent Poland” in the “Independent Poland. A Meeting Place” cultural pavilion in the Royal Łazienki Park in Warsaw, photo: Kamila Szuba / Office of the “Niepodległa” Programme

It should be noted that in 2019, numerous projects prepared by more than 400 entities bore the “Niepodległa” logo, and almost as many projects used that logo in connection with the funding received from the grant schemes run by the Office of the “Niepodległa” Programme.