The Office of the “Niepodległa” Programme is a state-run cultural institution. It was established on 1 February 2017 to serve the government’s “Niepodległa” Multi-Annual programme for 2017–2022. The Office of the “Niepodległa” Programme organises cultural events connected with the celebrations of the 100thanniversary of Poland’s independence and the rebuilding of Polish statehood, and coordinates the following grant programmes: „Niepodległa” (“Independent Poland”) and „Koalicje dla Niepodległej” (“Coalitions for Independent Poland”), under which several hundred projects are co-financed each year. The Office also supports the Government’s Plenipotentiaryfor the Celebrations of the 100thAnniversary of Poland’s Independence Minister Jarosław Sellin, who grants approvals for the use of the “Niepodległa” logo – the element that unites the various types of initiatives aimed at celebrating the centenary of Poland’s independence and rebuilding Polish statehood.

Re-enactors from the Independence Festival in Krakowskie Przedmieście, photo: Gabriel Gmurczyk / Office of the “Niepodległa” Programme

The Office of the “Independence” Programme also cooperates with ministries, local governments, associations and many Polish cultural institutions active within the framework of the “Niepodległa” Multi-Annual Programme which promote values that unite all Poles, i.e. freedom, respect for human dignity and rights, and solidarity.

Additionally, we publicise initiatives aimed at promoting Polish cultural heritage as seen from the perspective of more than a thousand years of our nation’s history. We also organise large cultural events such as concerts and performances combining speech with music, as well as smaller ones such as exhibitions and workshops. Some of those take place in the “Independent Poland. A Meeting Place” cultural pavilion run by the Office on the grounds of the Royal Łazienki Museum, one of Warsaw’s most recognisable sites. 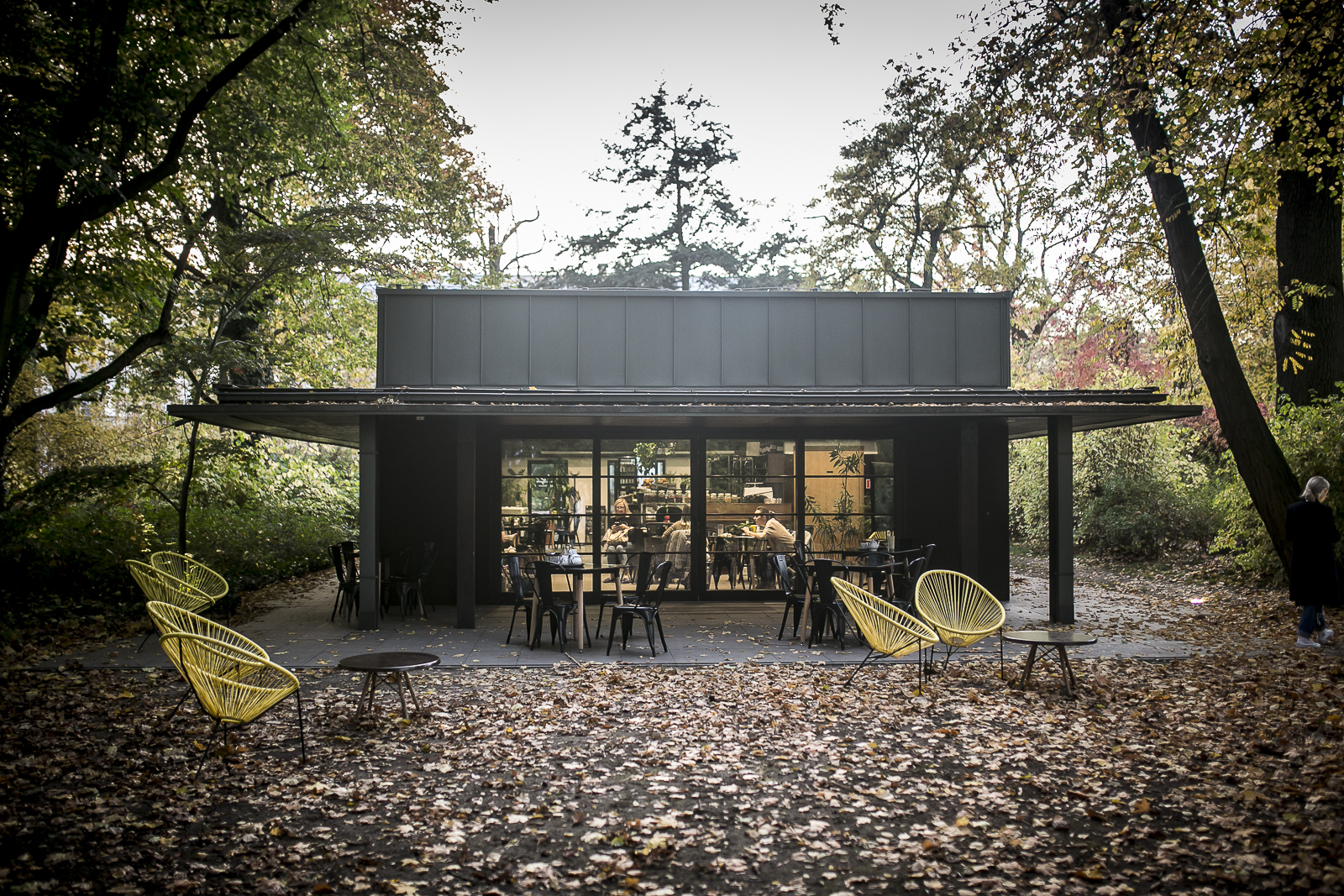 The centenary of Poland’s independence is both an opportunity to celebrate the past and an incentive to build a common future. In 1918, in the aftermath of the First World War, Poland returned to the map of Europe. The events that took place one hundred years ago were exceptional. Thanks to a combination of military, political, cultural, economic and social efforts, Poles regained the independence that they had lost more than a century earlier. Independence, however, was just the beginning: they also laid the foundations for a modern state, defended their borders, developed their economy, legislation and education. They returned to mainstream European culture through literature, art, design, architecture and music. A shared respect for the past proved not a burden but rather an incentive to create, plan, and achieve progress.

Regaining and consolidating independence was a long-term process in which Poles all over the world were involved. That process was supported by Poland’s many friends from countries that cheered the rebirth of the Polish state. The “Niepodległa” Multi-Annual Programme was designed to celebrate – and learn about – the richness of Polish heritage, culture and ideas together with citizens of other countries, including our Central and Eastern European neighbours, but also to reflect on the essence of independence and its meaning, especially in the face of today’s challenges and threats.

Activities under the programme

The Office of the “Niepodległa” Programme was established in 2017 as a cultural institution responsible for the promotion and communications of the 2017–2022 “Niepodległa” Multi-Annual Programme, which aims to strengthen Poles’ sense of civic community. 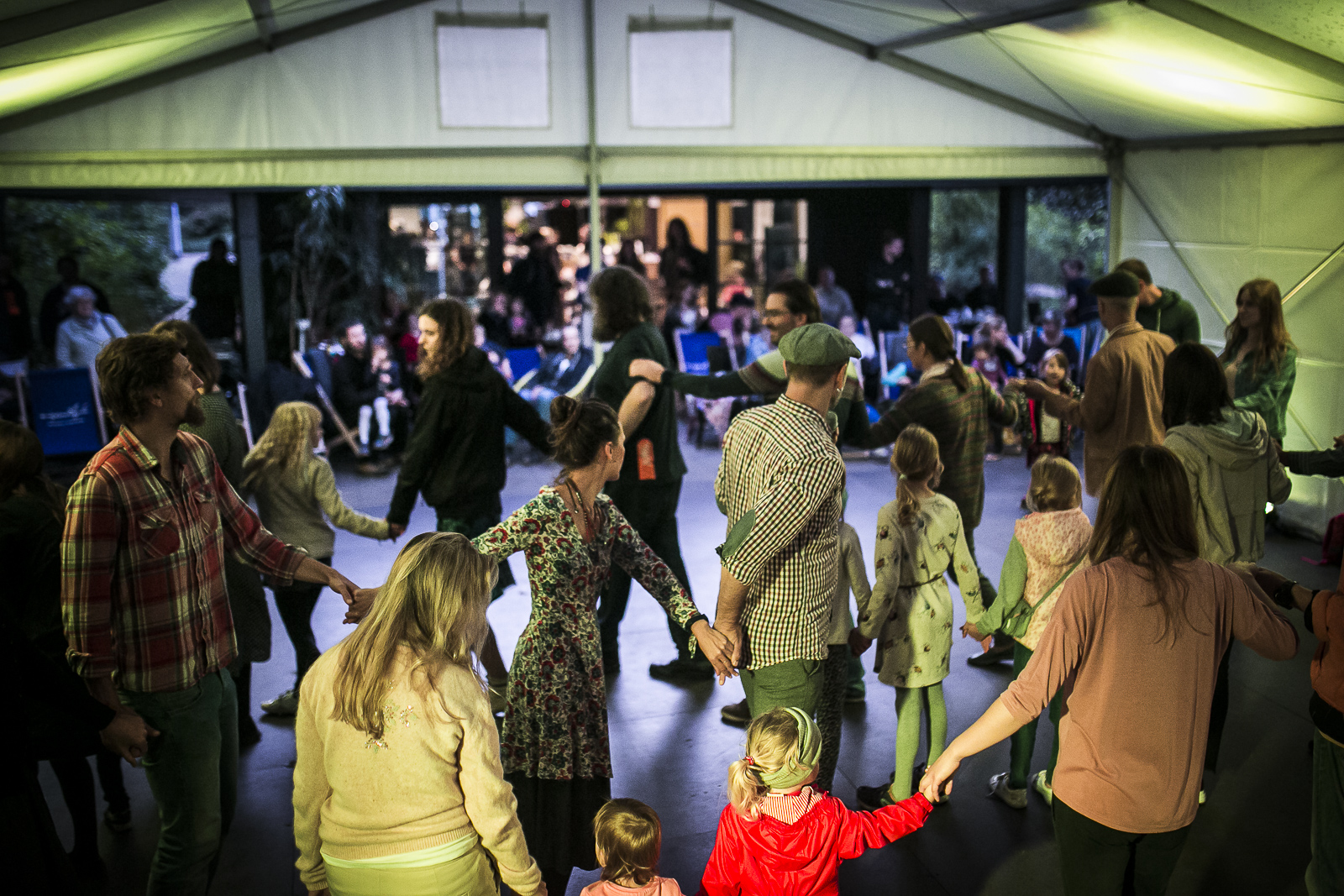 Photo from the dance which took place in a tent set up next to the “Independent Poland. A Meeting place” pavilion in the Royal Łazienki Park, photo: T. Kaczor / Office of the “Niepodległa” Programme

The joint celebration of Poland’s independence is inspired by values that are of particular importance to Poles: freedom, respect for human dignity and rights, and solidarity. These values underlie all activities carried out in each of the three priority areas of the “Niepodległa” Multi-Annual Programme.

The Office operates two grant programmes set up by the Ministry of Culture and National Heritage: “Niepodległa” (“Independent Poland”) and “Koalicje dla Niepodległej” (“Coalitions for Independent Poland”), which are targeted at cultural institutions run by local governments and NGOs. A total of almost PLN 36 million has been awarded under these grants between 2017 and 2020.

People dancing a traditional Polish dance – the polonaise – in Krakowskie Przedmieście in Warsaw during the “Independent Poland” Festival, photo: Tomasz Tołłoczko / Office of the “Niepodległa” Programme

The projects subsidised include both large and small-scale events. Many are based on interaction and cooperation – workshops, scouting games and quests as well as lectures, lessons, thematic walks, meetings and competitions have been organised. New thematic and historical routes have also been planned and marked. Festivals, concerts, performances (theatrical, musical and other) and historical re-enactments have been subsidised as well.

However, the most important purpose of the grant schemes is to support local communities and provide ways in which they can celebrate and work together to preserve local heritage. We aim to assist initiatives that bring people together, help form interpersonal bonds and create community-building mechanisms. The main objective of the “Niepodległa” Programme is to contribute to social ties through activities that involve community members. We hope that the relationships and projects built in this way will continue even after the Programme has ended.

The “Niepodległa” (“Independent Poland”) logo to which the Office grants use rights is part of the visual identification of the celebrations marking the centenary of Poland’s independence. It was created on the basis of the writings of Marshal Józef Piłsudski (Polish social and independence activist, Commander-in-Chief of the Polish Army from 11 November 1918, Head of State from 1918 to 1922, Prime Minister of Poland from 1926 to 1928 and in 1930; Piłsudski had a decisive influence on the internal and foreign policy of the Second Republic of Poland), from which instances of the words “independent” and “independence” were picked and subsequently digitally processed and combined into a word/device mark. 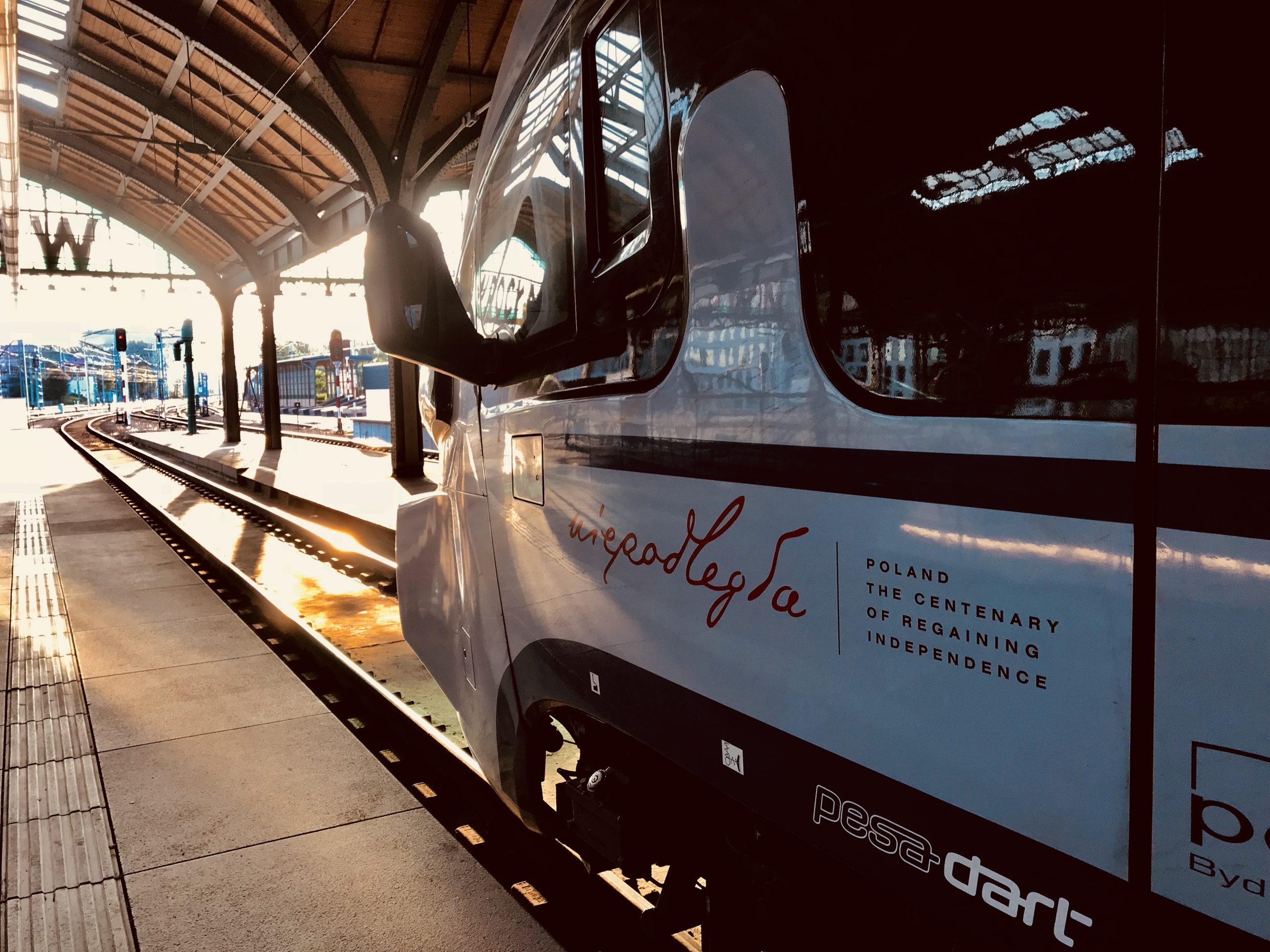 Train engine at the railway station in Wrocław, photo: Paulina Łukawska / Office of the “Niepodległa” Programme

The logo appears in promotional materials for events and projects related to the centenary of Poland’s independence and the rebuilding of Polish statehood. The “Niepodległa” logo is widely used by government authorities, local governments, cultural institutions, schools, sports associations and societies as well as by state-owned companies. From May 2017 until the end of 2019 alone, the logo was used in almost 7,000 projects. It appeared on the clothes worn by Polish athletes, on the planes operated by the carrier LOT Polish Airlines, and on the engines of trains operated by the Polish State Railways and by the PKP Intercity company.

We are pleased to see the “Niepodległa” logo so broadly used, since this demonstrates that – irrespective of divisions and disputes – we are united by common values, our remembrance of history and our desire to honour the efforts made by our compatriots more than a century ago to build state institutions from scratch.

Celebration of the centenary of Poland’s independence

In 2018, on the centenary of Poland regaining independence, the Office of the “Niepodległa” Programme set up many initiatives aimed at encouraging Poles to celebrate joyfully together. The Office organised, among other things, a concert in one of Poland’s largest sports arenas – the National Stadium in Warsaw. The event featured leading Polish artists who represented different generations and musical genres and was the first one in Poland to be broadcast simultaneously by five TV stations, both public and commercial.

The Office of the “Niepodległa” Programme also initiated the singing of the national anthem at noon on National Independence Day, which is celebrated on 11 November. In 2018, when the campaign started, the Mazurek Dąbrowskiego (“Dąbrowski’s Mazurka”) was sung in almost a thousand locations, both in Poland and abroad. The Polish anthem could be heard on all continents except Antarctica (and even that changed a year later when researchers from the Henryk Arctowski Polish Antarctic Station joined the “Independent Poland Sings the Anthem” campaign and as a result, on 11 November 2019, the Mazurka was sung everywhere in the world). 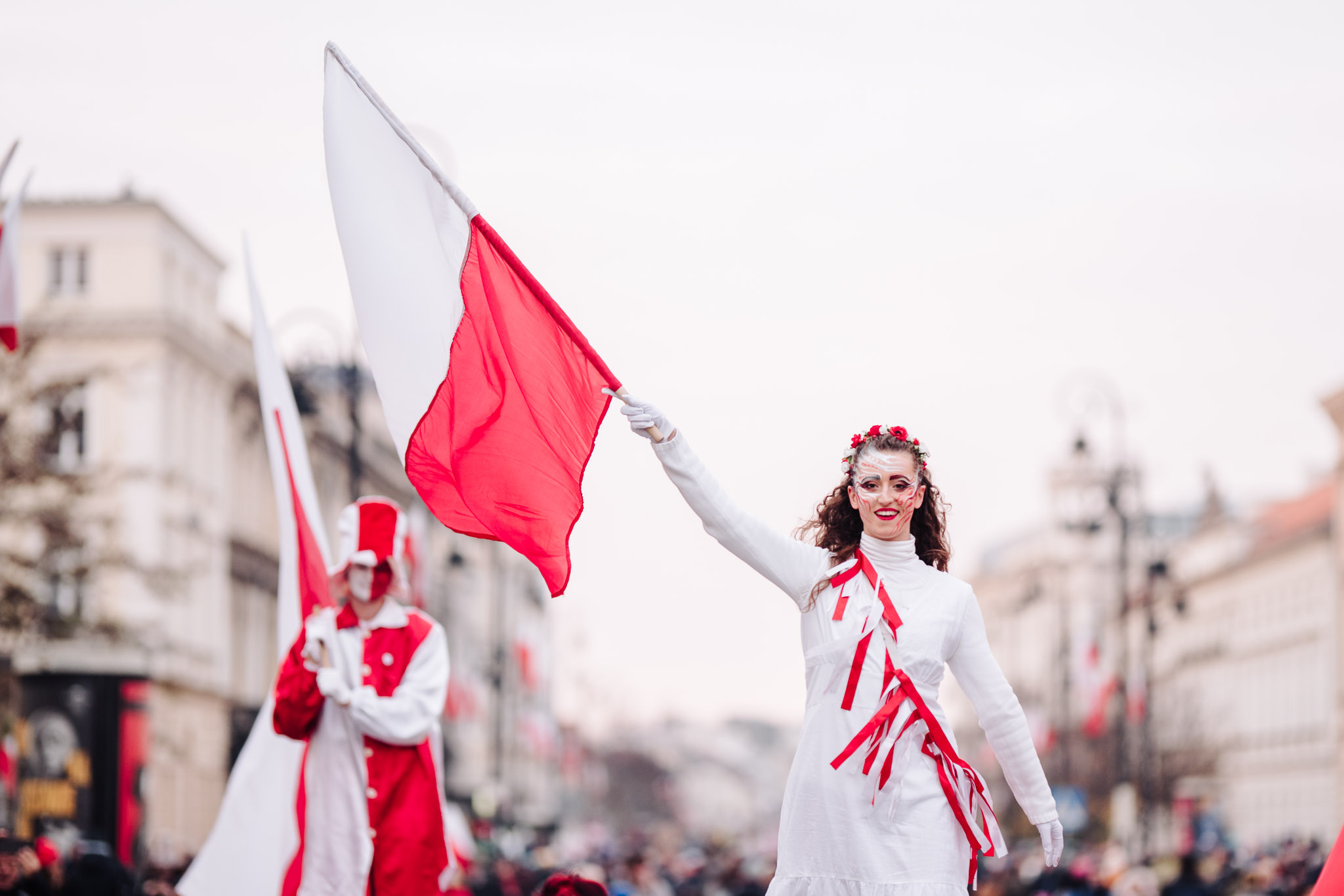 To mark the centenary of Poland’s independence, the Office of the “Niepodległa” Programme also organised a festival in Krakowskie Przedmieście, one of Warsaw’s most recognisable streets. It was attended by 300,000 people, with numerous concerts and artistic performances on three stages.

Celebrating the restoration of Polish statehood

In connection with the celebrations of the centenary of Poland’s independence, new traditions and ways of joyfully celebrating Polish sovereignty emerged. We have continued the efforts that started in 2017 and 2018. We have encouraged Poles to fly national flags and share photos of them on social media on 2 May, which is Flag Day, tagging them with the #mojaflaga (#myflag) hashtag, and at noon on 11 November – to sing the Polish anthem with their family, friends, neighbours and local communities.

We celebrate anniversaries that are important from the point of view of Poland’s independence and the rebuilding of Polish statehood, but also those which have influenced the shape of today’s Poland and its borders.

At the end of 2018, we celebrated the centenary of a successful bid for independence – the Wielkopolska uprising, which contributed to the inclusion of the Greater Poland region within the borders of the newly born Second Republic of Poland. Twenty-three projects prepared by associations and cultural institutions from the Greater Poland region received funding from the “Niepodległa” Multi-Annual Programme. Those included historical re-enactments, concerts, competitions, film screenings and theatrical performances, exhibitions and publications that popularised local history. 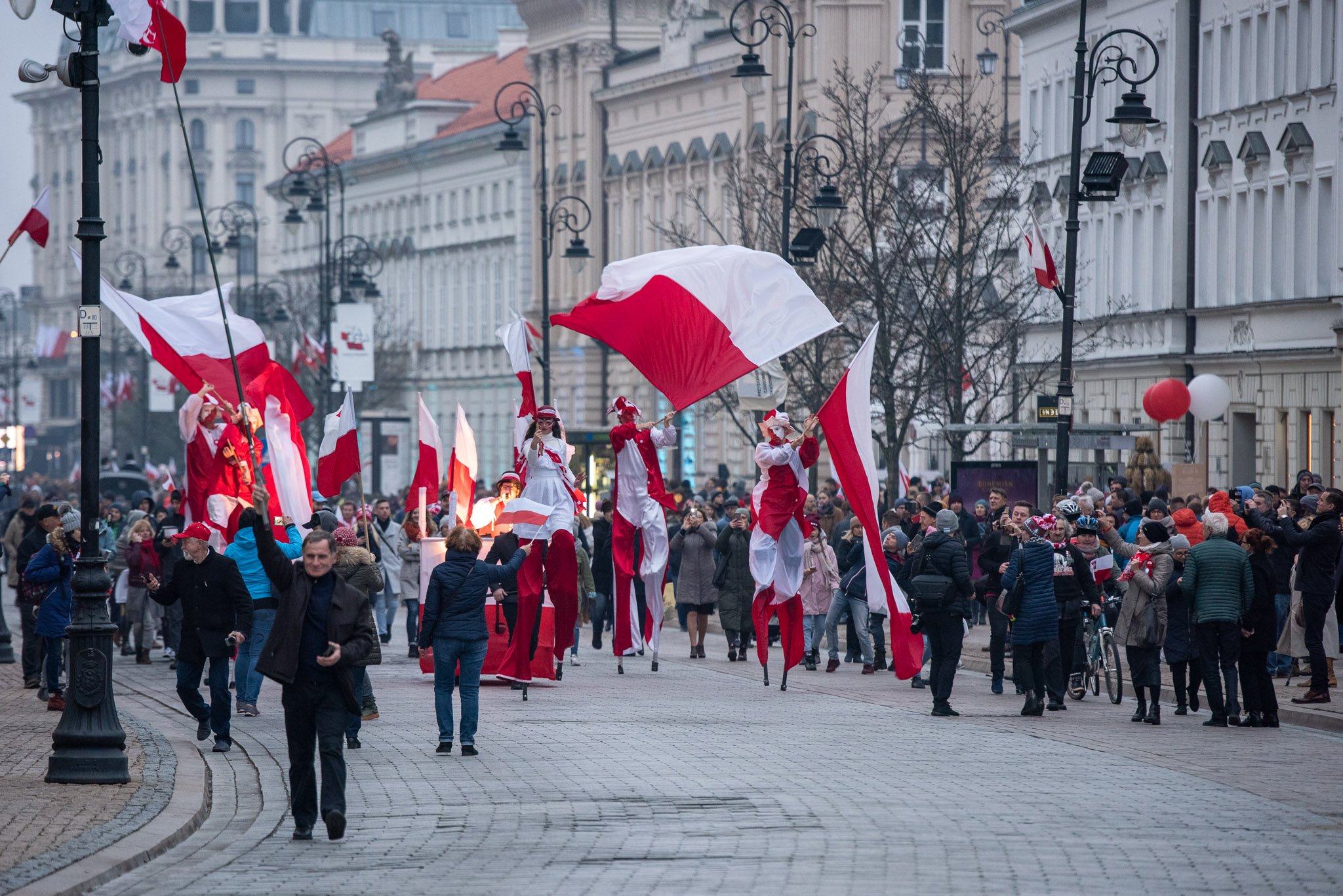 We have also celebrated the anniversaries of the three Silesian uprisings, which took place in 1919, 1920 and 1921 and allowed the newly reborn Second Polish Republic to extend its borders. In addition to concerts, exhibitions and publications, a nationwide information campaign entitled “Thank you Silesians” was rolled out as well. The spot focused on Silesians, but not just those who took up arms, but also activists from various sides of the political scene of that time, voters who opted for part of Upper Silesia to be incorporated into Poland, and the region’s other inhabitants, including women who made efforts to support their families in the absence of the men who fought in the uprisings. Uprising participants were mainly ordinary people whose commitment and determination brought significant political changes.

Those two events were inextricably linked. With the partially free elections of 4 June 1989, Poles sent a signal to the world that changes were afoot and that freedom and independence from Soviet influence that our part of Europe yearned for so badly were imminent. The first partially free elections demonstrated that the Polish society staunchly opposed the Communist rule and wanted to free itself from its yoke. Courage and the will for change triumphed, unifying the nation and ensuring a turnout at the ballot box that has not been bettered to date. 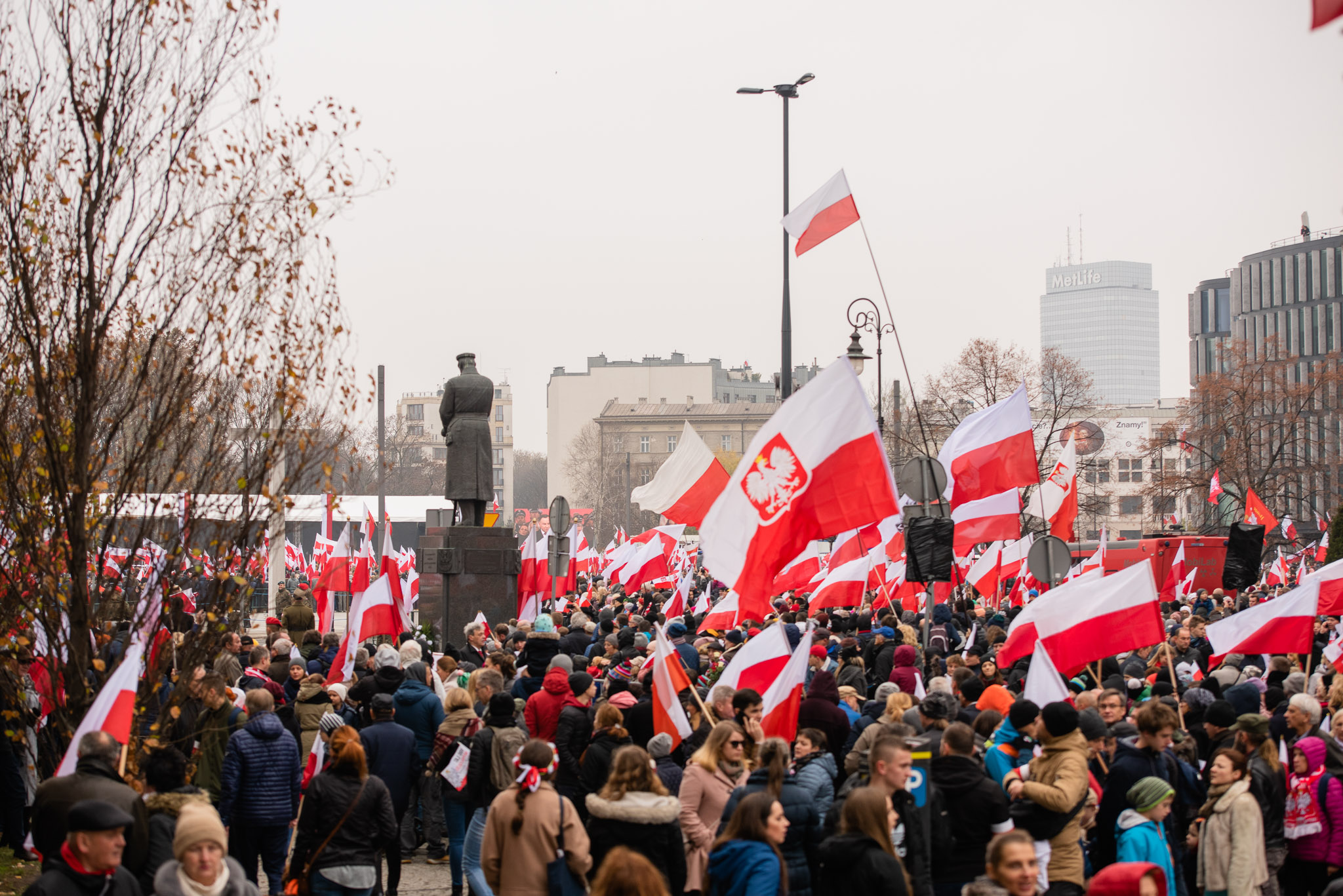 A crowd of people standing with Polish national flags; in the background, the monument to Marshal Józef Piłsudski

That would perhaps not have taken place had it not been for John Paul II’s earlier pilgrimage of to Poland. The words spoken by the Polish Pope in 1979 resonated with the listeners, giving them hope that Poland could once again rise up, and free itself from Communism. John Paul II played a significant role in the peaceful liberation of Poland from Soviet influence. His first pilgrimage to his homeland after being elected pope proved to be a landmark event, a spark that lit the flame of freedom.

In 2020, we will celebrate the centenary of the birth of Pope John Paul II, and also the centenary of the Battle of Warsaw. That battle is considered one of the most important in the history of the world, since it halted the spread of Communism in Europe and allowed Poland to retain its independence. On that occasion, in July 2020, the Office of the “Niepodległa” Programme plans to launch a special website dedicated to the Battle of Warsaw in collaboration with the Polish Radio. The website will be available in multiple languages and is intended to familiarise foreign audiences with the history and realities of early 20thcentury Europe.