“The Astronomer Copernicus. Conversations with God” – Jan Matejko’s epic painting in London for the first time

From 21stof May London’s National Gallery will be hosting a new exhibition – “Conversations with God: Jan Matejko’s Copernicus”. The centrepiece of it is an iconic work of Jan Matejko, one of the most famous Polish painters of the 19thcentury, titled “The Astronomer Copernicus. Conversations with God”. It’s the first time this monumental painting, depicting one of the most famous European astronomers, will be available for the audience in the UK.

“The Astronomer Copernicus. Conversations with God”, a painting of astronomer Nicolaus Copernicus, will be exhibited in London for the first time this spring. Alongside this epic work, the exhibition will include astronomical instruments from the 15thcentury and a copy of Copernicus’s “De revolutionibus orbium coelestium” (“On the Revolutions of the Celestial Spheres”) from 1543, the most famous work of this Polish astronomer, which changed human understanding of the universe – Copernicus is known as the man who “stopped the Sun and moved the Earth”. However, Nicolaus Copernicus is not the centre character of the exhibition – its purpose is to introduce Jan Matejko to an international audience. 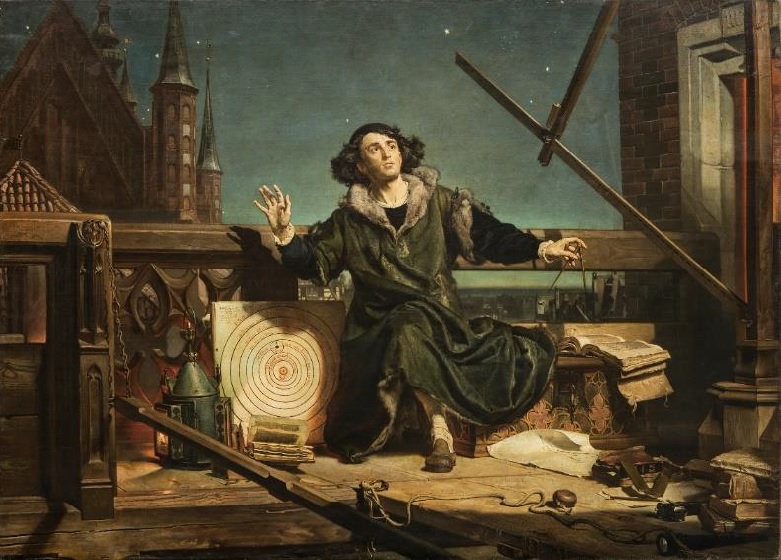 Matejko is considered one of the most iconic Polish painters of the 19thcentury, but despite being hugely famous in his homeland, he is largely unknown outside of Poland’s borders. Exhibition curators are trying to explain how important Matejko’s works were for the Polish nation, living under foreign partitions, and its identity.

Jan Matejko himself was born in 1838 and died in1893, therefore he never saw his county independent, but he dedicated his entire life and art to shape and encourage the Polish cause. His paintings were not largely historically accurate, they were meant to move hearts and inspire great minds to fight for independence. That’s why he chose one of the greatest Polish minds – Nicolaus Copernicus – to be one of the characters for his paintings.

Copernicus – Man who stopped the Sun and moved the Earth

“The Astronomer Copernicus. Conversations with God” depicts Nicolaus Copernicus, the astronomer who formulated a model of the universe that placed the Sun rather than Earth at its centre over 70 years before wider-known Galileo did it. Matejko decided to paint the astronomer not at the moment of making his revolutionary discovery, as the heliocentric model of the heavens is pictured as completed already, but on the rooftop of his house in Frombork, discussing the matter with God. It was also Matejko’s way of making his point in the conflict about Copernicus’s nationality – both German and Polish historians at the time were claiming the famous astronomers as their own. It was a lot more crucial to the Polish nation at the time to build a memory of its heroes, and that’s why Matejko joined the discussion through this painting, showing Copernicus kneeling awestruck against a starry sky, with the city’s cathedral where he served as canon visible in the background, clearly positioning him as Polish.

The painting itself is truly monumental – 10-foot-wide – and was hugely popular ever since it was presented in 1873 in Kraków to mark Copernicus’s 400thbirth anniversary. It was circulated in thousands of reproductions and subsequently acquired by subscription for the Jagiellonian University. The painting rarely leaves the walls of the University; therefore, the London exhibition is quite a unique event.

“Conversations with God: Jan Matejko’s Copernicus” is available for all National Gallery’s visitors until 22ndof August 2021. Opening times are 10-18 and 10-21 on Fridays only. All exhibits are from Jagiellonian University Museum, National Museum in Kraków and National Maritime Museum in London. Exhibition is accompanied by a publication by Professor Andrzej Szczerski from National Museum in Kraków, Christopher Riopelle, The Neil Westreich Curator of Post-1800 Paintings at National Gallery in London and Professor Owen Gingerich, astronomer and science historian, specialising in Copernicus’s “On the Revolutions of the Celestial Spheres”.

The exhibition is supported by Polish Cultural Institute in London, The Capricorn Foundation and the Ministry of Culture, National Heritage and Sport of the Republic of Poland as part of the Multi-annual Programme “Niepodległa” 2017-2022.